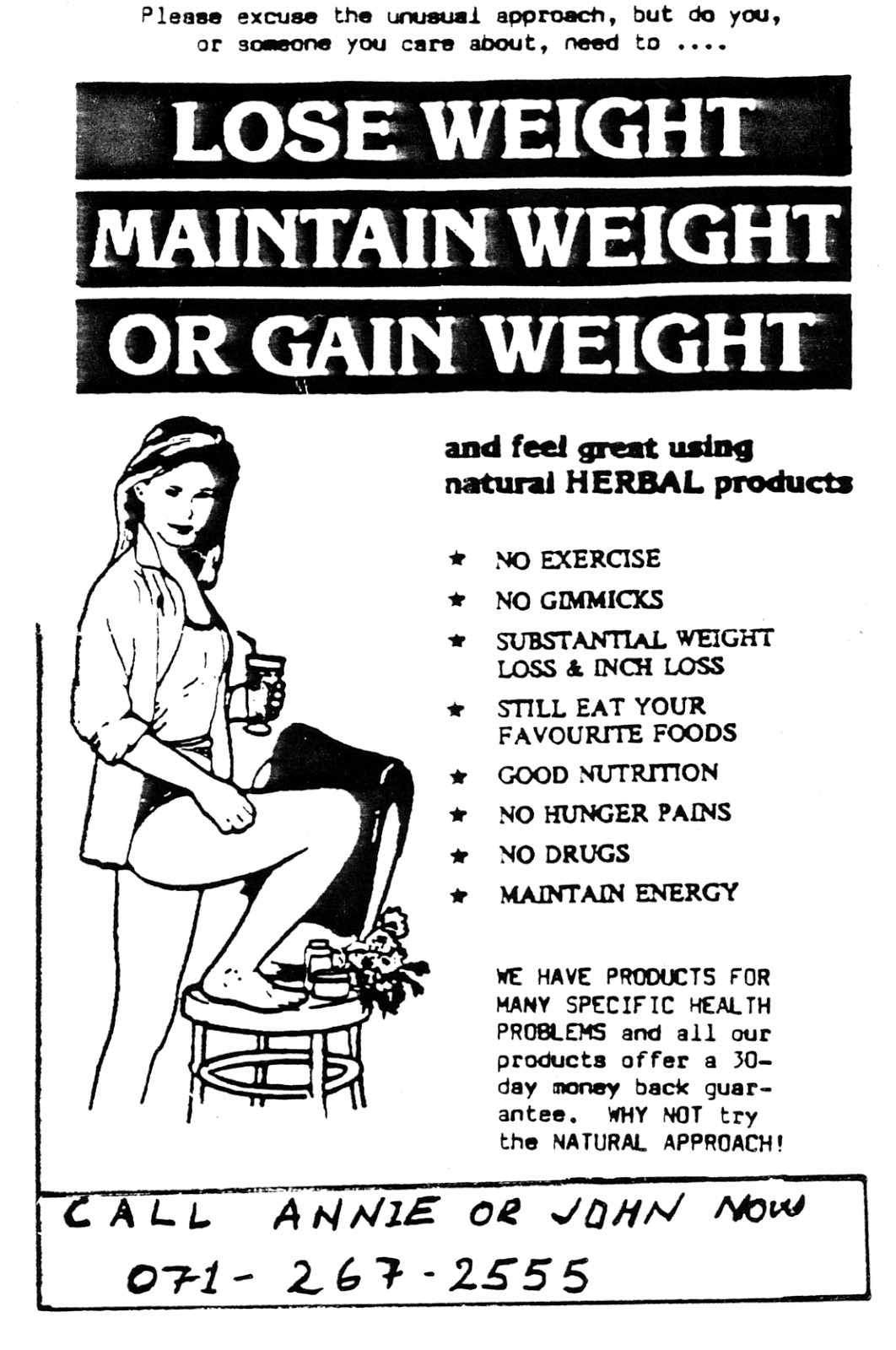 Some time ago, this charming little flyer came through my letterbox.
'Please excuse the unusual approach', it begins. As if! It goes on, 'Do you, or someone you care about, need to lose weight, maintain weight, or gain weight?', a question to which the only answer can be 'yes'. Or it would be, were it not for that little bully of a word 'need'. Substitute 'want' for 'need', and we can all relax. We can think twice before contacting Annie and John to order some of their 'natural herbal' products that involve 'no exercise, no gimmicks, substantial weight loss and inch loss (though not, presumably, for the minority who want to maintain or gain), good nutrition, no hunger pains, and no drugs, in addition to maintaining energy and allowing us all our favourite foods. Plus, there's a 30-day money back guarantee if the products fail to achieve the 'lose weight, maintain weight or gain weight' promise. Though of course, they're sure to achieve one of those three.
Posted by MH Jeeves at 4/28/2014 No comments:

Big or Small or None at All? 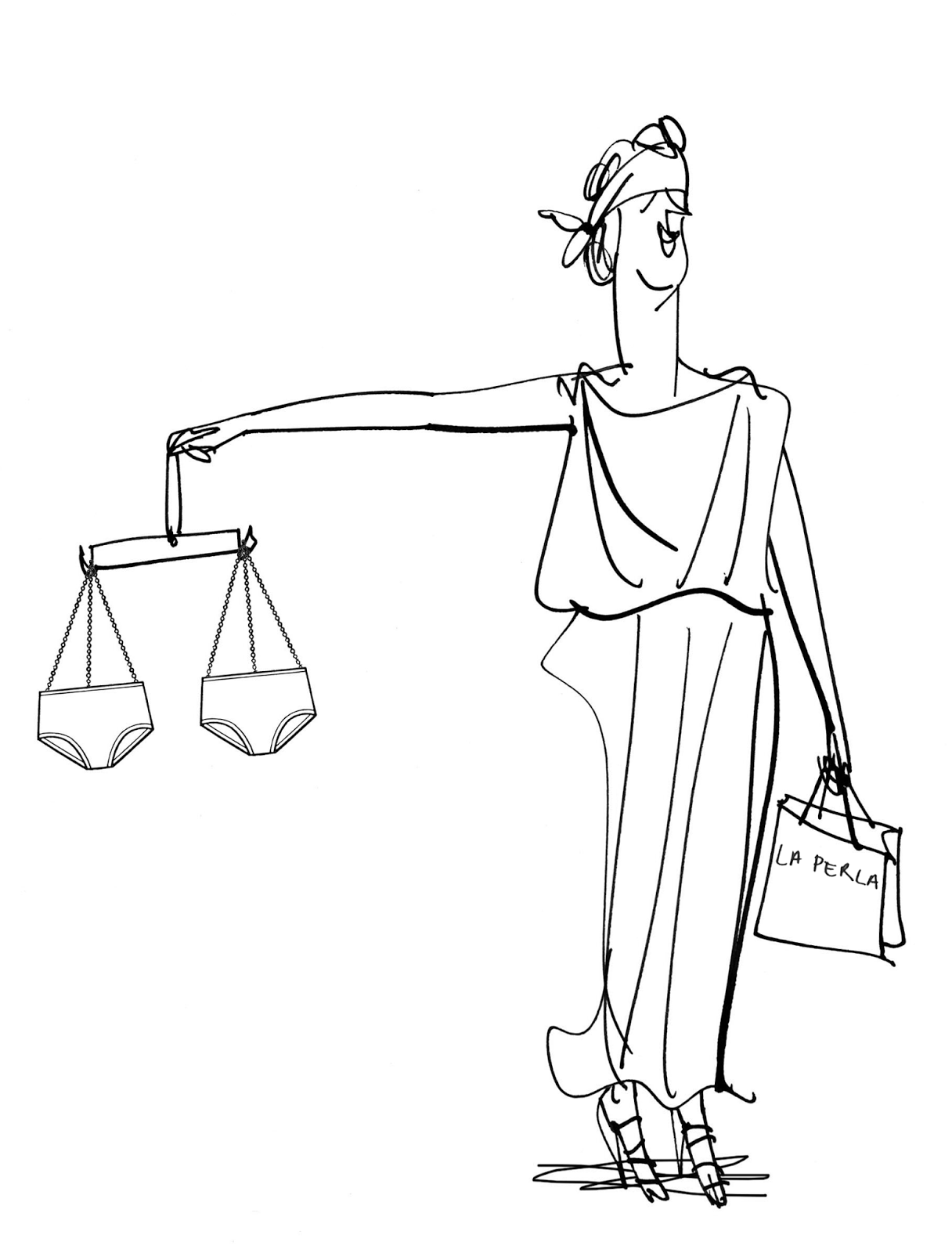 When Justice, that paragon of impartiality, takes a day off, leaving thieves, rapists, despots and murderers to get on with their business, I like to imagine she finally has time to sort out the really important questions of life. Like, is it better to wear big pants or little pants? Knickers, I mean. A brief internet search provides a wealth of quotes on the subject, with which I hope to clarify the arguments for both sides.

Power is not something that can be assumed or discarded at will like underwear. John Kenneth Galbraith, Economist
Huh? I can't imagine he was the sort of chap who took off his Y-fronts during a lecture, even to make a point.

Life is like underwear, should be changed twice a day. Ray Bradbury, Author
Again I say, huh? This approach requires too great an initial expenditure on underpants, let alone laundry bills. Likely his mother was the type who went on about the importance of clean underwear in case of an accident.

I've taken my knickers off. My friends told me my panty line was visible, so I went without. Helena Christensen, Model
Miss Christensen demonstrates some sort of logical approach to the question. To wear no underwear is at least economical, and can have visual benefits, although these benefits only come into play when the person involved has a very acceptable figure. Like a model. For my part, I fear both leakage and draughts, and in general am happy in the knowledge that my stout and voluminous jeans rule out a v.p.l. You'll note that the question of thongs- those knickers designed by some sadist to provoke maximum discomfort and irritation- never arises. As far as the v.p.l goes, it's all or nothing.

Underwear makes me uncomfortable, and besides my parts have to breathe. Jean Harlow, Actress
Again this is a reasonable approach, but only if you're prepared to die young, as did Miss Harlow (1911 - 1937).

Ageing doesn't mean giving up style and individuality; it doesn't mean abandoning fashion and living in comfy slippers and flannel knickers. Twiggy, Model
Two items I am in fact sporting at this precise moment. This comment is wrong, wrong, wrong. Knickers are not about fashion (with the exception on the v.p.l: see comments above); they are about comfort on the one hand, sex on the other.

This is an occasion for genuinely tiny knickers. Bridget Jones, Girl About Town (i.e. Helen Fielding, Novelist and Screenwriter)
Sex, indeed. A hot date is the time for tiny, crotch-searing knickers.

From the cradle to the coffin underwear comes first. Bertolt Brecht, Dramatist and Poet
Good to have evidence that even the greatest minds have dwelt on this question. I'm with Mr. Brecht here. 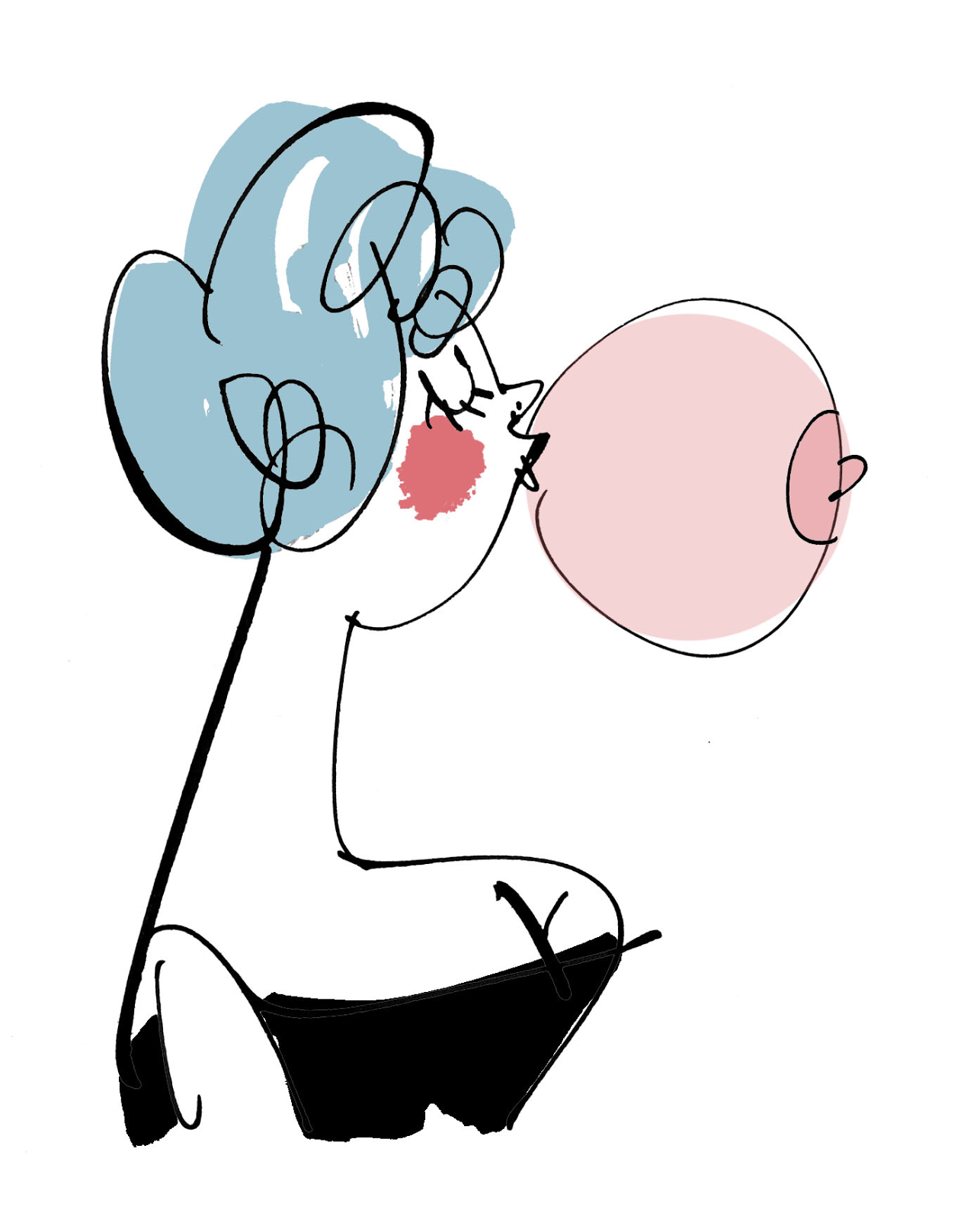 Nothing to say about this. Apologies for lack of taste.
Posted by MH Jeeves at 4/08/2014 No comments:

Around rush hour, London is awash with working women striding to or from their offices wearing trainers. So speedy, so comfortable, so kind to the feet, and so good to see that  fashion has at last caught up with me. Or possibly, common sense had caught up with the working woman.
Rihanna, on the other hand, described in the March 2014 issue of Vogue USA as wearing  'four-inch pointy-heeled Saint Laurent black suede booties', is quoted as saying, "I can dance in them.. It's not about pain. It's about the commitment. I say to myself, 'I want to look like this,' and worry about the pain later. I've had nights I had to tiptoe home and the balls of my feet wouldn't even allow me to stand." That's bravery. You've got to admire the woman. But then, of course, she can afford the ministrations of a chiropodist.