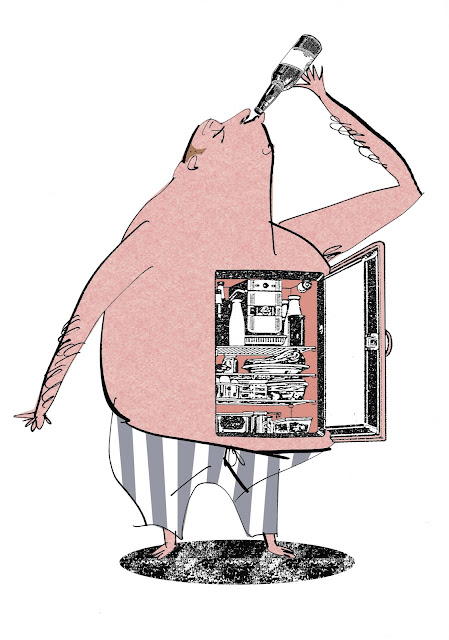 The beer belly- not a good look. I realise that of course one doesn't develop this sort of feature on the basis of one night's drinking, but, tonight, the drinking and firework night of the world, I would recommend sticking to one or two slender glasses of champagne..
Happy New Year!
Posted by MH Jeeves at 12/31/2012 No comments:

Time for a little decoration and merriment. This is the time of year when those who have been rigorously waxing and shaving might come to regret a lost opportunity. There have been moments in centuries past when more hair, rather than less, was the thing, and even the adornment thereof with flowers, ribbons, jewels. Only viable under voluminous petticoats rather than lycra, perhaps, but definitely fresh territory for some Martha-Stewart-inspired holiday styling.
Season's greetings to all!
Posted by MH Jeeves at 12/23/2012 No comments: 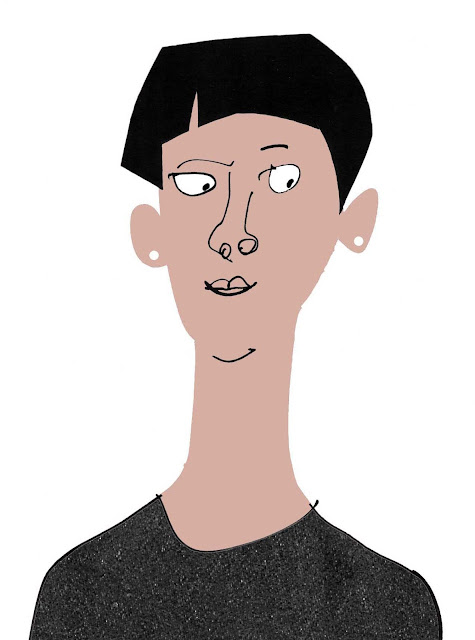 According to Desmond Morris, in some parts of the world, a woman needs to have long, dangly earlobes in order to be considered beautiful. Mutilation begins in infancy, with increasingly heavy earrings being attached to holes in the earlobes in order to stretch them: 'by puberty, only the girls with the longest ears are considered to be beautiful.' ('The Naked Woman', Desmond Morris, Jonathan Cape 2004) The size and number of earrings- apparently up to 1 kg of metal dangling from each lobe-  appears excessively high to the likes of me, and a considerable burden. But I must confess that I do have pierced ears, onto which I attach generally modest items- nothing larger than, say, a teaspoon. I'm not tempted to acquire more holes, or elsewhere, but others seem to go overboard; the piercings spread and multiply like a rash.. 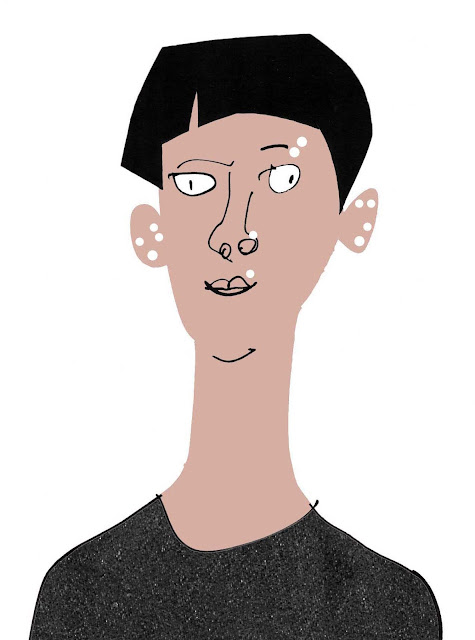 .. a little nose ring appears, and then a stud or two. Bit by bit, the wearer is eroded.. 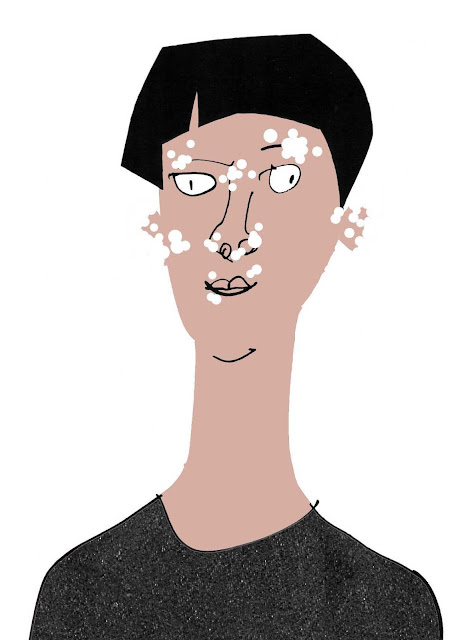 .. until very little of use remains.. 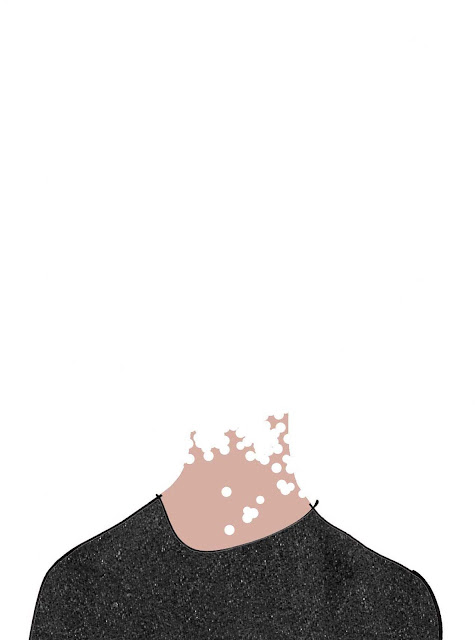 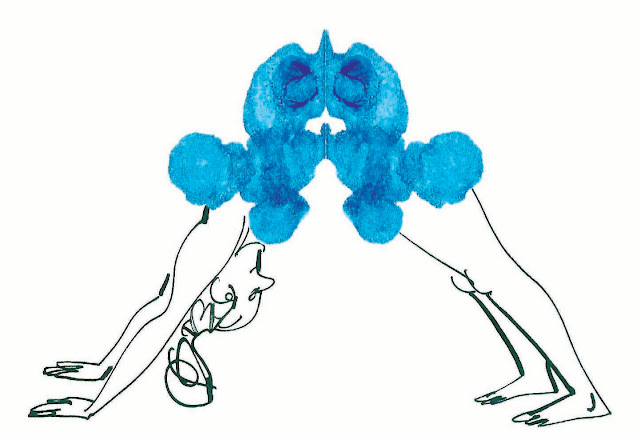 Tonight is my regular yoga night. I'm a yoga agnostic, or possibly just a slacker yogi.
I attend classes in an attempt to prevent my body seizing up as I creep towards general decrepitude. I treat the poses as exercises, which is not the attitude of a true devotee. Rather than attaining self-purification and the conquest of the body to render it a fit vehicle for the soul, etc., I only hope to be able to touch my toes when I hit eighty.
Early on, when I was in a more enthusiastic phase of practice, I acquired the classic guide, 'Light on Yoga', by B.K.S.Iyengar, 'the world's foremost authority'. I have taken the liberty of reproducing a few photographs of Mr. Iyengar demonstrating a few simple poses, and some rather more advanced variations. You'll notice that in none of the snaps does Mr. Iyengar look happy, but I suppose that's not the point. He's certainly taking it more seriously than I am. My 'down-facing dog', above, and his, below: 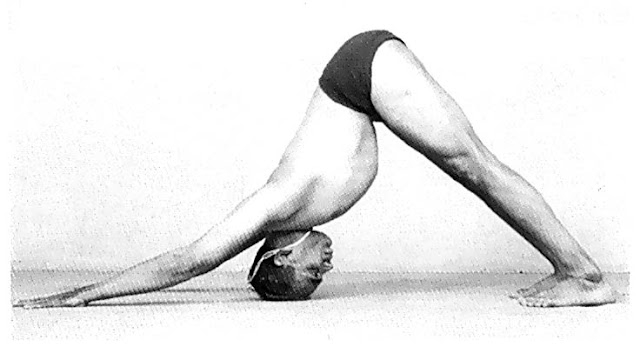 Followed by 'prasarita padottanasana', of which I can manage only the simplest version: 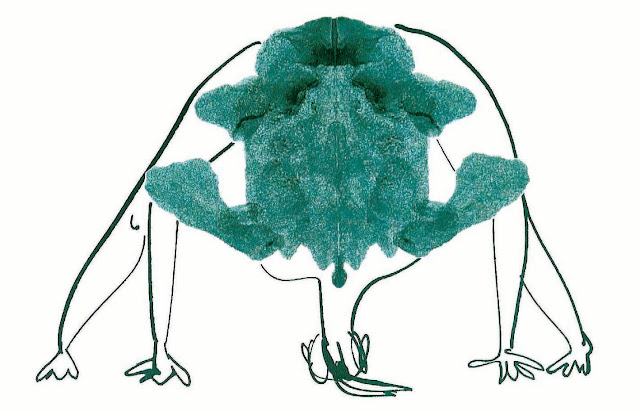 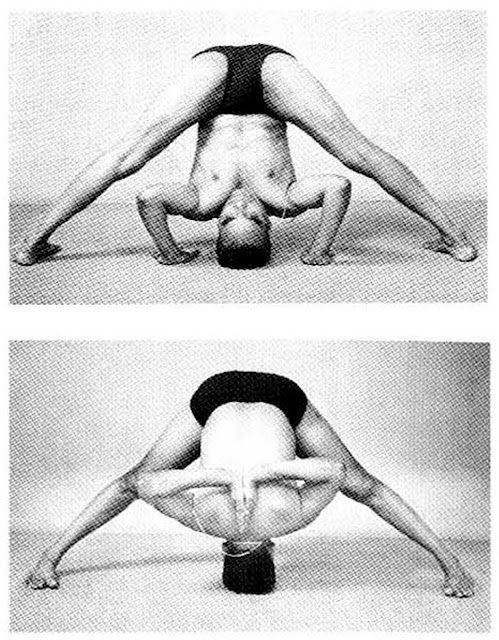 And finally, a balancing pose. 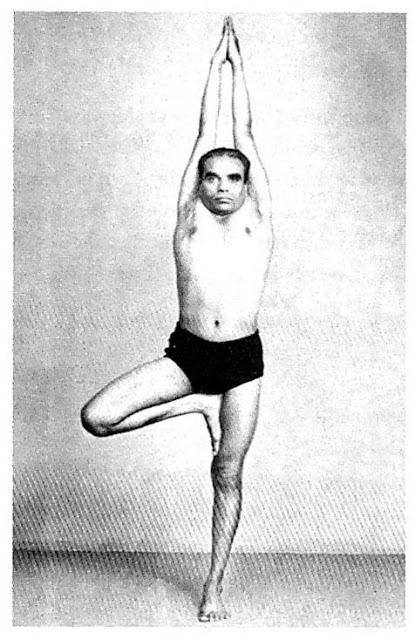 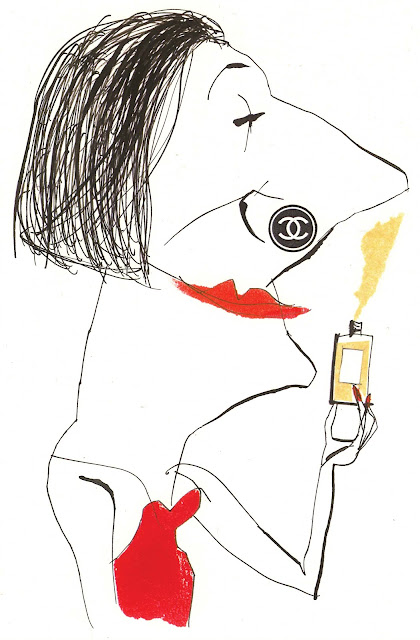 Yesterday I visited the Tanks at Tate Modern in London for the first time since they opened earlier this year. I was blown away by a multi screen installation by William Kentridge, a series of preliminary studies he produced for his staging of Shostakovitch's opera, 'The Nose', which was in turn based on a short story by Nikolai Gogol. I haven't read it (yet), but apparently 'The Nose' tells the tale of a civil servant who wakes up one morning to find his nose has left his face to enjoy itself gallivanting around St Petersburg.
It's entirely reasonable that the nose should star in a satire. The least regarded of the elements that make up the face- the female face, at least- it generally attracts negative rather than positive consideration, & and is the feature that most readily demands 'improvement' with cosmetic surgery. Well.. but I value my sense of smell extremely highly, so closely it is linked to memory and sentiment. The smell of a Gauloise cigarette, for instance, takes me right back to childhood summers in France.  And I recently came across a lone tree in a botanic garden that gave off the very same delicately honeyed aroma as the miles of spruce forests in Newfoundland, Canada. I hope I've got the right tree there. All very Proust, of course, but I'd seriously miss my nose if it took a holiday.
Posted by MH Jeeves at 12/02/2012 No comments: